When you look for headlights for your vehicle there are three technologies in the automotive realm. There are Light Emitting Diode (LED) lamps, High-Intensity Discharge (HID) lamps, and Halogen lamps.

Halogen lamps have been used since cars were invented but over the last two decades, they have been replaced by Light Emitting Diode (LED) lamps, High-Intensity Discharge (HID) lamps. This is because they offer much better illumination.

What are the LED headlights?

A Light Emitting Diode (LED) is a semiconductor.  When electrons pass through a certain type of semiconductor the diode glows due to electroluminescence. They are used in headlights due to their many benefits. This light is more efficient compared to other light sources such as the halogen, CFL, incandescent tungsten bulbs, etc. This is because they use less energy, radiate more light without heat.

An electric current – known as holes and electrons- passes through this solid-state conductor to produce solid-state lighting. LEDs can produce different colors as the semiconductor with electrons and holes have different energy bands.

The separation of the bands is known as bandgap. This bandgap determines the energy of light particles or photons emitted by the LED lights. The semiconductors are usually group III, IV, and V elements from the 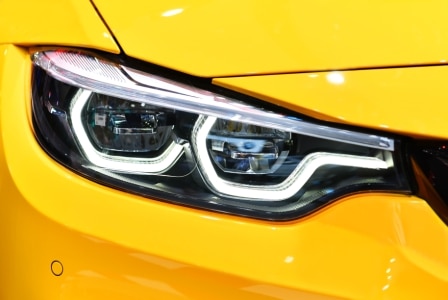 periodic table. The development of these lights is based on research on gallium nitride (GaN). It opened up a wide palette of colors and many applications.

There are many benefits of the Light Emitting Diode lighting.

Lifespan – An average LED lasts for 50000 – 100000 operating hours. This is 2 to 4 times longer than metal halide, fluorescent, or sodium vapor lamps. And more than 40 times longer than the incandescent tungsten lamps. This means you need to replace them less frequently; they are low maintenance leading to a reduction in labor and other costs.

Safe – Incandescent bulbs emit heat – this is because the light is being produced to the resistance in the tungsten filament. This converts 90% of electricity into heat while only 10% is used to produce light. In the case of LED lights, there is no heat and bright light is produced at low voltages making them safe. There is no fire hazard or the risk of electrocution.

Small size – LED lights are tiny. Small devices can be 10th of mm2 while large ones can be just a mm2. This miniaturization besides the above-mentioned properties has made them adaptable to many illumination applications. They are used in headlights, traffic signals, mood lighting, stadium lighting, etc. 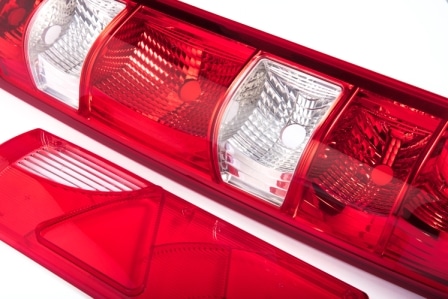 RI) – is the measurement of the light’s ability to show the actual color of the object. This index is comparable to the actual light or natural light. The best way to appreciate this characteristic of LEDs is to compare the rendering with that of a sodium lamp or tungsten lamp which may be monochromatic. LEDs produce 65 – 95% true color.

Directional Emission – LEDs emit light in 180 while other types of lighting emit 360. This necessitates the use of reflective or redirecting devices such as a cone. This results in an additional cost and loss of efficiency of lighting. The LED emits light in the required direction and no losses or additional costs.

Design Flexibility – Due to their tiny size and directional emission LEDs can be used anywhere. They can be combined into a bunch or assembly to emit a bright clear rendering like daylight. Or they can be used as a single LED in an isolated device or strung up in a wire in a sequential manner. The design possibilities are myriad.

Solid State Lights (SSL) – As LEDs are SSL, they do not require a glass bulb around them. These glass bulbs are fragile and need to be handled with care. There is no such issue with the LED lights.

Dimming capability – While you are driving in the dark you may need bright headlights or you may need dimmers. LED lights can be operated at any percentage from 0 – 100%. Specific hardware is required to brighten or dim these lights. The advantage is that as less power is passing through them their lifespan is increased. Besides, they operate at better efficiency.

Instantaneous switch on – LEDs turn on immediately – no warm-up period is required. And they can be turned on and off – made to blink – without degradation in the device.

Eco-friendly – These lights do not heat up, have no emissions nor leave any residue. They last longer than the mercury vapor, fluorescent, or halide lamps.

Visible spectrum – LEDs produce most of their light in the visible spectrum there is a minimal amount of infrared or ultraviolet light. This means these lights can be used to illuminate items sensitive to degradation by these 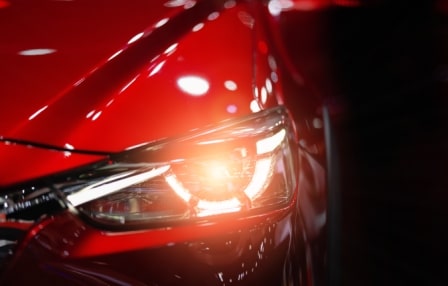 Low voltage – As these lights use very low voltage, they can be used in flood zones and moist or rainy places without fear of electrocution.

Correlated Color Temperature (CCT) – LEDs are available in a wide range of CCT values thus you get warm, cool, yellow light, white light, and other options too.

What are HID headlights?

High-Intensity Discharge (HID) lamp are gas discharge lamps that produce light from an electric arc mounted between tungsten electrodes. The setup is enclosed in a transparent or translucent fused alumina or fused quartz arc tube.

This enclosure has a non-oxidative environment of metal halide salts and a noble gas mostly xenon. Xenon warms up the lamp within 10 seconds to full brightness. These lamps have been around for more than three decades as they produce bright light. They are used in headlamps and lighting stadiums.

These systems require a high voltage AC circuit while the other car systems work on DC. Thus, a separate ballast is installed for the proper working of HID headlights.

There are many advantages and benefits of HID headlights.

High Energy Efficiency – These headlights have 4 times better output in terms of lumens per watt than halogen lamps. They convert electrical energy into light in an efficient manner producing 110 lumens per watt. In comparison, halogen lamps have an output of 25 lumens per watt. These lights not only improve the efficiency of the battery but also enhance and prolong its charging life.

Long Life – The bulbs and the ballast last more than 3000 hours. In most cases, these bulbs last longer than the vehicle. You will get more than 10000 miles from your vehicle with you may replace the HID headlamp. HID lamps lose some brightness over time – approximately 25% after 2000 hours of illumination. 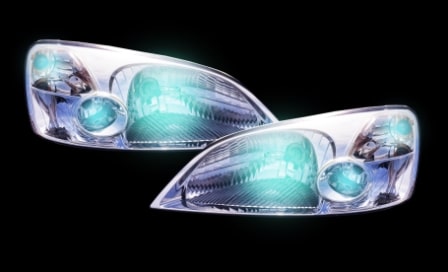 High Visibility – due to better illumination. HID headlamps produce a bright bluish-white light. This brings better visibility and color rendering compared to other light sources. This affords better visibility at night and emergencies. The color temperature and visibility are measured in terms of Kelvin. The white light of mid-summer sunlight is 5000K. The visibility and color temperature of the Original Equipment Manufacturer (OEM) HID is 4300K whereas a halogen lamp produces 3200K. This light helps the drivers see the signs and row markers easily and clearly. With an increase in the output, the visible area or illumination cone increases over a wider area in front of the car. Thus, the directional lighting of HID headlamps does not distract the motorists making them safe for everyone.

Classy Appearance – HID headlamps are associated with luxury thus used on luxury or high-end vehicles. Aftermarket kits are available to upgrade your vehicle. The offer a cleaner classier appearance compared to the usual lamps on cars. Installing a car with HID headlamps causes it to stand out.

Installation – There are several brands and kits in the market. These have a neat and easy to install design. They include the bulb, screws, built-in igniters, ballast holders, fuses, zip ties, and instructions for installation. You can install the system by yourself quickly and easily.   If you are not confident then you can hire a mechanic. The entire process takes 40 – 60 minutes.

Buying the bulb – There are many brands and kits available in the market. Do your research well before you invest the money. There many subtle differences and many qualities of HID bulbs. It is prudent to check the reviews. The bulb should bring you greater energy efficiency, better visibility, and last longer than other bulbs.

LED vs HID Headlights: Which is Brighter?

The HID headlights have been around longer and are more mature technology. But even though LED headlights are newer on the scene that are overtaking in terms of efficiency, technology, and popularity. 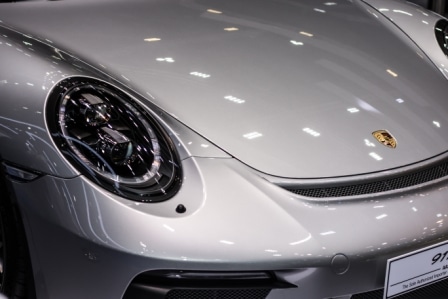 headlights are available from 3000 – 10000 K. As most people choose between 4000 – 6000 K this is a moot point. They choose this range of illumination and visibility as it mimics daylight with better color rendering. This makes then popular for night time illumination on the car.

HID headlamps have a brief warmup period of around 5 seconds. LED headlamps switch on and illuminate immediately. It goes from darkness to full brightness as soon as it is switched on. There is no fluctuation in illumination due to voltage fluctuation too.

HID headlights produce infrared light which may be beneficial to people in cold regions. It can assist melt ice and clear roads. LED headlights do not emit infrared or UV light. Some manufacturers blow hot air onto the headlamp lens.

Another fact to be noted here is that LED lights are brighter than the HID or halogen lamps of the same wattage. But LED lights are not available in high wattages. Thus, they have to be replaced with a greater number of LEDs to make up. Even in this scenario they are 80% more efficient and save power.

In other words, if you light a 40-watt HID headlight against a 40W LED the difference in the lumens will be 3550 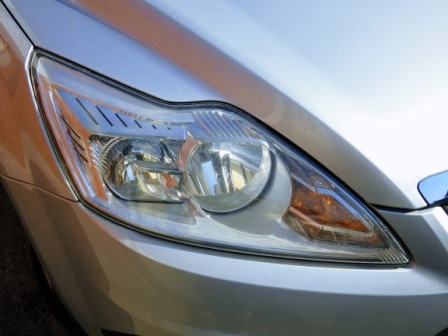 This is due to the following factors; the HID headlights have a filament that glows due to electrical resistance between two tungsten electrodes. The filament wears off in 1500 – 2500 hours. Whereas the LED headlamps last 15000 – 50000 hours. This is because these lights do not have any working parts that move or break. Besides the current flows smoothly with 90% more efficiency bettering their output and prolonging their life.