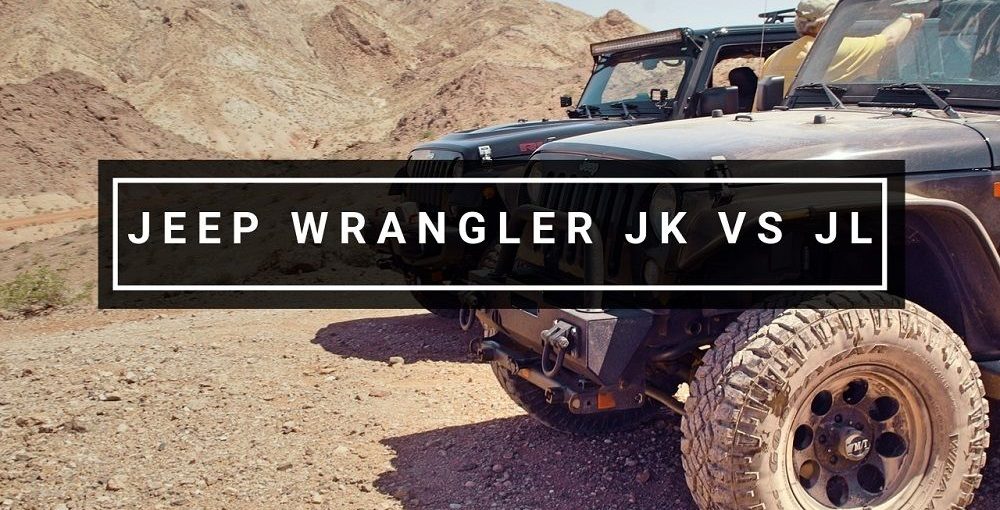 Do you love off-road or open road adventures? Then the Jeep Wrangler is one of the best vehicles that you may want to consider. This is a model that is equipped with all the features to create a memorable off-road experience. It is fun and most importantly it is affordable.

If you are familiar with the Wrangler, you may have come across the JL model, which has been on the market for a while. In early 2018, the JL model was introduced, which is a next-generation version. So what is the difference between the JL and the JK Wrangler? We are just about to find out.

When the JL Wrangler came into the market it was viewed as an improvement of the JK Wrangler, which is accurate. The latest version has improved performance and capabilities and we want to get to compare the similarities and differences between the two models.

The grille is one of the key features on Jeep Wranglers. While the JK comes with the traditional Wrangler grille, the JL has an upgraded one, which creates a striking difference. While both of them retain the 7 grille slot, a closer look shows a difference.

The JK has a smooth grille from the top to the bottom and the spaces are quite narrow between the openings. As for the JL model, there is a kink in the middle of the grille, which makes its face go slightly out. It also has wider gaps in each opening.

The JL Wrangler has the LED daytime lights and the turn signals on the front fenders. On each of the fenders, there are vents that are strategically placed and this has significantly reduced the wind noise. Unlike the JK model, the JL has a raked windshield, which is easier to remove.

On the hood of the JL model, there is a cowl panel and a power bulge hood, which has a black plastic. This makes the process of removing the windshield wiper easier.

The newer JL Wrangler comes with a vent, which is behind the driver and there also passenger fender flares. This is a critical feature as it allows improved airflow from the hood of the vehicle. The JK Wrangler has a restricted airflow, which is caused by the hood flutter. The hood catches on the JL model and the vents facilitate the airflow in the hood area.

While most of the modern vehicles have been moving to the keyless ignition, the Jeep Wranglers have always maintained the conventional key startup. That was until the introduction of the JL Wrangler, which comes with a push start button. For the JK model, you still have to use the key to start it. The newer model is refined and the push button gives it the feel of a modern vehicle.

The JL model was brought into the market with a new and improved UConnect system. There is a reverse camera that is mounted on the spare tire and is controlled from the touchscreen system. The JK model has a common radio, but the JL has a modern console and will integrate easily with your smartphone.

There is an option for a 9 speaker stereo system and also has a waterproof subwoofer, giving you high-quality sound. On the tailgate of the JL model, there is a label that has important details, including the water fording depth limit, departure angle, wheelbase specifications and the vehicle approach.

The new JL Jeep Wrangler has an updated steering wheel, which has all the controls. It comes with switches that are built in and this allows you to connect air compressors, lighting and other devices that you may need for off-roading adventures. As for the predecessor, the JK Wrangler, you would have to drill and install the auxiliary switches separately.

The JL Wrangler has appealing interiors. The storage cubicles are rubberized and there is also rubber that has been put around the multimedia touchscreen. The cup holders are also rubberized and this makes it easier to spray down the JL, when it becomes dirty.

On the back side, there is a foldable seat in the middle, which also comes with cup holders. There are air vents as well in the rear for climate control. All these are additions that are conspicuously missing on the JK Wrangler.

This newer Jeep has a better on and off road performance, with a better engine and enhanced transmissions. Here are the differences between the two, in terms of performance:

As for the JK model, you will only have one type of engine to choose from and that is the Pentastar V6. The JL Wrangler, on the other hand, offers 3 new engine options in addition to the Pentastar. The first one is the Hurricane, which is a 2.0L turbocharged engine, which is a hybrid system.

This is a 4-cylinder engine and has eTorque. The second option is the 3.0L EcoDiesel engine, with a 6-cylinder capacity and this is to be introduced in 2019. The third type, which will be availed in 2020, is the full plug-in electric engine, which is known as the gas guzzler.

One of the unique differences with the driving is that the JL offers a comfortable ride, unlike the JK model. The JL is better for the off and on road driving than the JK Wrangler. The newer JL model is smoother and pretty much quite than its predecessor and the wind noise has been reduced significantly.

There are increased features in terms of safety and visibility, and this makes the JL Wrangler safer to drive on highways.

The new JL Wrangler offers 3 new tops that you can choose from. These are designed in such a way that they will reduce the wind noise and are easier to remove. Overall, the JL is a new and improved Jeep Wrangler even in terms of the performance. It will not disappoint on the highway and has an enhanced performance for off road driving.

As you have guessed, the price of the JL Wrangler is higher than that of the JK Wrangler. The price difference will range from $2,600 to $3,350 between the JK and the JL Wrangler. However, the price is worth it, considering all the features that have been included on the new, fourth-generation JL Wrangler.

Both the JK Wrangler and the JL Wrangler are great jeeps to have. However, as you can see, the JL comes with enhanced features, which improves the overall functionality and performance. If you are looking to get more from the Jeep Wrangler, pay a little bit more and pick the JL Wrangler and it will not disappoint you.

How Reliable are Jeep Wranglers?

How to Measure Rim Bolt Pattern the Right Way

6 Safety Tips For Traveling With a Cargo Carrier

Symptoms of Water in Gas Tank and How to Fix It

How to Remove PEX Crimp Ring: Step by Step Guide

4 Causes Why Tail Lights Not Working But Brake Lights Are

Duratrac Vs ko2 Tires: Which One is The Best?
Jeep Wrangler JK vs JL – Head To Head Comparison
10 Best Jeep Soft Top: Reviews and Guideline For 2019
How Reliable are Jeep Wranglers?
How to Measure Rim Bolt Pattern the Right Way
13 Best Tires for Jeep Wrangler Reviews in 2019: Buyer’s Guide
Lucas Heavy Duty Oil Stabilizer Review: Yay or Nay?
SureCan 5 Gallon Gas Can Review: Is It Worth It?