Bloodlines don’t get purer than this. The Wrangler can trace its lineage to the Willys MB produced between 1941 – 45. These vehicles have been all-terrain vehicles since their inception and are reliable to the core. However, the name Wrangler did not appear until the 1987 model that replaced the Jeep CJ model.

We will trace the reliability of Jeep Wrangler by tracing its history. It is reflected in the mileage it has covered over various continents and the number of lives it has saved. The idea of the Jeep took form even before World War II.

Willys-Overland won the contract with the US Military to make a 4 by 4 for the war. The vehicle was christened MB but soon acquired a nickname “Jeep”. After the success of the Willy MB, the company manufactured the Willy-Overland CJ between 1954 – 54. This was the civilian version sold Stateside. The CJ-2A gained the reputation of being easy to fix, reliable, and impossible to break.

Soon it became the preferred commercial and agricultural vehicle and found its way to various rugged places on the Earth such as the Alps and the Kalahari Desert. This model was updated with the CJ-3A and CJ-3B. The next update – the CJ-4 was built but was not put into production.

The Willy CJ-5 was produced between 1954 to 83 by the Kaiser Motors who had bought the Willy-Overland. Even though this Jeep was different for the earlier versions it remained in production for the next 30 odd years. Thanks to the takeover and the generation – now the vehicle was officially known as Jeep.

Kaiser introduced the Tuxedo Park line for the people looking for a less utilitarian vehicle. They also built a longer 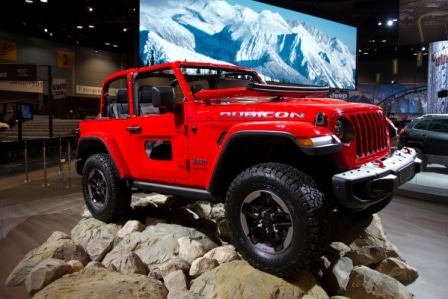 The next model the CJ-7 was produced between 1976 and 86. It was larger than the CJ-5 and offered better on-road manners. It also had evolved features such as automatic transmission, metal doors, and a roof. This model remained in production for 11 years then AMC decided it was time for an upgrade.

Considering the bare-bones off-roader reputation of the Jeep it may sound odd that the first Wrangler was designed for on-road performance. Produced between 1987-1995 the Jeep Wrangler YJ had a wider track, reduced body roll, a large windshield, and low ride height. This was the most civilized off-roader but the squared-off headlights were not popular. The AMC was bought by Chrysler soon after the debut of the YJ.

The jeep was powered by either a 2.5 liter 4-cylinder or a 4.2-liter inline six-cylinder engine. Each of these engines offers a choice between a 3-speed automatic and a 5-speed manual transmission. The 4-liter I-6 engine replaced the 4.2 liter one. It had a fuel injection system that brought the extra dose of power it needed. Over the next few years, the brand added some more safety and creature comforts such as antilock brakes, rear seat belts, etc.

The Jeep Wrangler TJ was produced between 1997 and 2006. It has round headlights and a coil spring suspension instead of the leaf springs. As this was an update to the YJ the chassis was not redesigned. It also has the same engine options as the YJ. The 2.5-liter 4-cylinder engine was replaced by the 2.4-liter 4-cylinder engine.

This version also dealt with the rattling issues, the door-seal wind noise, the poor cabin temperature control, and the choppy ride. These improvements won over many loyal buyers while the vehicle retained its all-American off-road ability.

In the year 2007 Jeep redesigned the Wrangler. The vehicle was wider, taller, and longer with a longer wheelbase. This design is more comfortable compared to the TJ and has safety features such as traction control and stability control. The brand also offered a 4-door option that proved to be successful and sought-after. 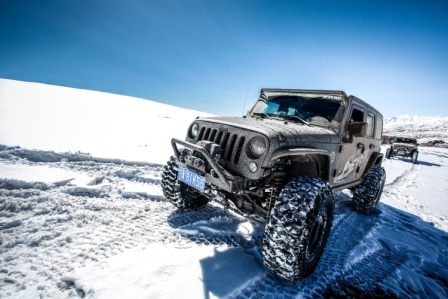 The Jeep JK was also the first generation of Wranglers designed without parts sourced from AMC. It also offered a new 3.8-liter V-6 engine without the 4 cylinders. The Jeep Wrangler JK offered two options – the 6-speed manual and a 4-speed automatic transmission. By the year 2018 Jeep had refreshed the Wrangler with a better interior and a 3.6-liter V-6 engine with a 5-speed automatic and 6-speed manual option.

The Jeep won raving reviews from people who drove in rugged Africa. They liked the upgraded, safer, user-friendly civilized version of the Wranglers forebearer with the military bred prowess and confidence.

Since 2018 the Jeep Wrangler JL has focused on improving efficiency by improving the technology and improving its off-road capabilities. Its body is still of high strength steel but the doors, hoods, and windshield frames are lighter as they are made of aluminum. While the tailgate is made of magnesium.

The brand still offers the 3.6-liter V-6 engine but you should try out the turbocharged 4-cylinder. The 3-liter diesel V-6 is soon to be phased out. The JL is available in 6-speed transmission but the 8-speed automatic is available.

The Jeep Wrangler JL is as modern as they get with its 8.4-inch touchscreen infotainment system, the blind-spot monitoring system the rear parking sensors with cross-traffic alert.

Even though the Jeep has modernized the Wrangler with technology and features that appeal to the buyer. The brand has remained true to the off-road enthusiast and struck a balance between modern & tech-savvy and rugged & reliable. The models have been true to the Jeep heritage keeping the hardcore off-roaders happy. This is because the models have all the features that made these vehicles a legend.

Even in the year 2020, is the reliable one as it has Jeep’s heroic off-road capabilities. It has a luxurious, throwback, or vintage styling where the roof and doors can be taken off. It is trucklike instead of an SUV with a tight cabin and wind noise. This is an all-conquering off-roader where tradition meets technology. Due to these features, it will also double as a daily driver. 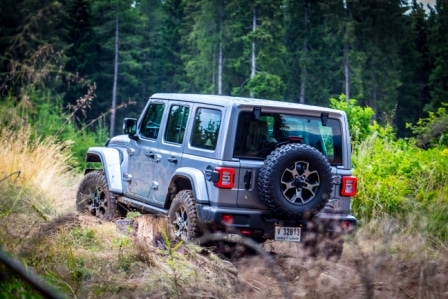 Jeep added many trim packages such as an optional diesel engine and revised the gasoline engine line up. There 2-door Wranglers – in the Sport, Sport S and Rubicon series. There are 4-door Wranglers include these three series and the Sahara Trim. They are fitted with the 3.6-liter V-6 engine while the Sahara has a mild-hybrid e Torque assist in the Sahara.

The turbocharged 2 liter 4-cylinder engine is available as an option in most Jeep models and can be supplemented with the e Torque assist in the Sahara. There are 3 optional packages with the Wrangler Willys edition. They have aggressive rock rails, a limited-slip rear differential, and 32-inch mud-terrain tires for off-road capabilities.

The Wrangler Freedom edition pays homage to the military with special touches to the exterior and interior of the Jeep. The Wrangler Black & Tan has a tan soft top and a black badging on the exterior. The 3-liter V-6 EcoDiesel model is expected by mid-year. It delivers up to 260 horsepower and has a 442 pound-foot rock crawling torque.

The simple roots of the Jeep Wrangler help keep the prices affordable. The other reason is the design with a removable top made of cloth. But some models are still loaded with creature comforts such as the air conditioning, the leather-clad steering wheel, power locks, and windows, heated mirrors, automatic headlamps, and much more in the Sport S model.

The beast even has a 270 horsepower 2-liter turbocharged 4-cylinder engine. It produces a torque of 295 pound-foot which is 35 pound-foot more than the standard V-6. The 4-cylinder is standard with the 8-speed automatic. The powertrain combination makes it less of a stress to drive. It is also packed with technology like a 7-inch touchscreen with Android Auto and Apple CarPlay features.

This 285 horsepower, 3.6-liter V-6 engine of the previous generation JL has made its way under the hood of the new one. It can be paired with the 6-speed manual gearbox or the 8-speed automatic. The turbocharged 4-cylinder is optional and steams up with the electrical motor to supplement the low-end power. 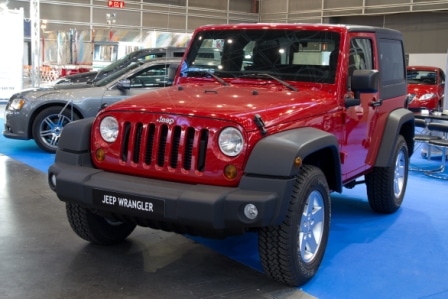 As the Wranglers come from a long line of off-roaders a part-time four-wheel drive is standard across the range. This feature is controlled by a lever on the central console. The base model 2-door Wrangler Sport with a V-6 engine and 6-speed manual transmission gained 0 to 60 MPH in 6.1 seconds.

A full feature 4-door Sahara with an automatic transmission picks 0 – 60 MPH in 6.8 seconds. A 4-cylinder hybrid powertrain 4-door Sahara is wee-bit quicker at 6.5 seconds. The Rubicon is not as quick as it carried heavier off the road equipment. The Wrangler performs better than the previous models. Its handling has improved.

The fuel economy of the Wranglers put them ahead of their rivals. The Sahara is a V-6 powered 4-door Jeep that returned 20 MPG over a 200-mile highway test for fuel economy which is 3 MPG lesser than the EPA rating. The turbocharged 4-cylinder hybrid model returned 26 MPG which is 2 MPG more than expected.

The Jeep Wrangler is not as spacious as other SUVs but brings you a seamless blend of vintage and modern features. It has a commanding presence on the road and easy maneuverability. The rear-ward view is blocked by grab handles, roll bars, and thick roof pillars. But if you want a better view simply pop the top and remove all the doors. The driver is seated close windshield and the front seats face a squared-off dashboard punctuated with air vents and chunky switchgear for power windows, climate control, and infotainment.

As this automobile started as an errand runner in the military there is room for gear and groceries. The rear seats do not fold flush with the floor. The Jeep has a significant cargo carrying capacity in the classic 2-door and 4-door model. You can fit 2 carry-ons in the back seat of a 2-door. While the 4-door will carry ten! Your reliable ride will do anything for you and take you anywhere!

In the present day and time, you want to remain connected via your smartphone’s connection. The Jeeps infotainment system will communicate with your smartphone via Bluetooth. The Wrangler has the Uconnect interface that is easy to use, responds quickly, and displays information on the touchscreen. It is available in 3 sizes and it connects to Android Auto, Apple CarPlay for navigation, and has a 9 speaker Alpine Audio system.

Jeep has also announced the electrified models at the Las Vegas Consumer Electronics Show. They are releasing 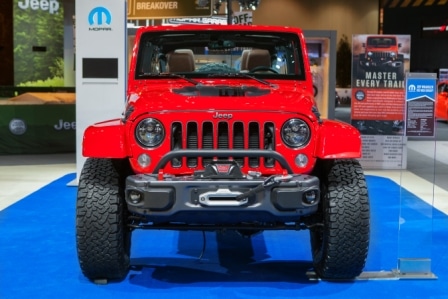 Plug-In hybrids in the Jeep Compass 4xe, Renegade, and Wrangler series. They have the charging port on the Wrangler’s front fender. In the Renegade and Compass, the charger is on the rear quarter panel. Another highlight is the blue accents and badging that differentiates these models from their fossil fuel cousins.

In summary, the driver assistance features bring added security and safety to the ride. There are features such as the blind-spot monitoring, rear cross-traffic alert, and rear parking sensors on the chassis. Though you should note that the Wrangler has not been rated by the National Highway Transport Administration and the Insurance Institute of Highway Safety. Thus, there is no study or statistics available on its crash-worthiness. Besides the Wrangler carries fewer driver assistance features than some of the costlier SUVs but did you want the tough World War II off-road toughie. So, enjoy one! Besides Jeep is going to be with you with its reliable warranty and maintenance cover. Its warranty covers 36000 miles or 3-years. The powertrain warranty is 60000 miles or 5 years. They even offer complimentary 2-year maintenance. You can even extend the warranty that would include a non-transferable lifetime coverage. The Jeep Wave program for owners is a standard for all the Wranglers and offers 2 complimentary oil changes and tire rotation service for 2 years.