There is an electrical system in a car that runs the car’s headlights, interior lights, wipers, climate control, radio, and other devices that require power. There are times these devices do not work. This is mostly because the fuse keeps blowing. It is very easy to fix a blown fuse. However, these maintenance tips will prevent this eventuality.

What are a fuse and its function?

Fuses are installed in an electrical system to prevent a surge of current in the system. Fuses, which in essence are electrical safety devices provide overcurrent protection to circuits.

It is a metal strip or a wire made of tin and lead alloy that melts when too much current flows through the wire. The excess current causes this low resistance alloy to heat up causing it to melt breaking the connection.

These safety devices have a fuse rating – it is the maximum amount of current that can flow through a fuse without the alloy wire melting. The fuse rating is indicated on it as 1A, 2A, 3A, 5A, 10A, etc.

When a current flowing through the system exceeds the current rating of the fuse and the system. The element in the fuse melts breaking the connection or the circuit. This discontinues the flow of the current. This happens to protect the device running on this circuit such as a radio, a wiper, a horn, a light, etc. The discontinued flow of 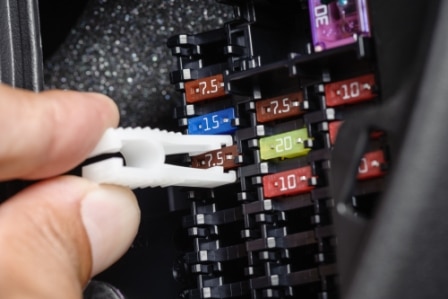 current prevents damage to the circuitry on this device. In short, the fuse prevents excess current from flowing into the device.

Usually, the fuse should not blow as the car is installed with a rated fuse that can take the usual load on the system. These fuses are rated slightly more than the current that will pass through the system. For example, a fuse of 3A may be fitted in a system of devices that operates on 2.5A of current.

Thus, the reasons why excess current is flowing through the circuit should be investigated and corrected.

The Causes of Why the Fuse Keeps Blowing in A Car

All vehicles have a fuse box fitted in the glove compartment. It is maybe under the steering column or near the feet. This safety box has fuses that have strips of wire that melt when excess current passes through the circuit. Nowadays the mechanics simply replace the blown fuse with a new one without looking into the cause of the problem. If you remove or remedy the root cause the fuse will not blow. Look for the culprits causing the fuses to blow. The usual suspects are;

Incorrect fuse or damaged amplifier may be the cause of the blown fuse. When the amplifiers wires are connected to the wrong fuse. Or the vehicle is driven on a rough road and the fuse is being tossed in the car. It damages the internal structure of the components. This causes the fuse to blow as soon as the current is switched on. If not corrected the condition can damage the car components and cause a fire in the electrical system. The solution is that while installing the amplifier check the power wire and fuse opening. 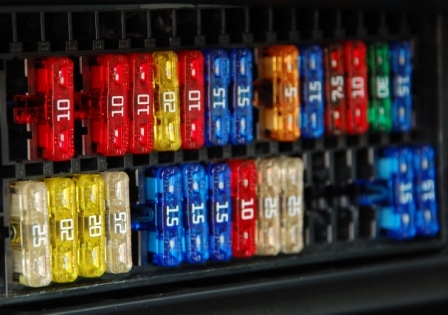 Resistance – We know that when current passes through a wire it meets with resistance. The broader the gauge of the wire the lesser the resistance. This is the reason the correct gauge of wire is chosen so that a certain amount of current can flow through it without resistance or less resistance. Thus, the fuse blows if the wire inside the plastic or rubber sheath is broken. The other reason could be the diameter of the wire or the gauge is small or narrow. This leads to resistance in the wire to compensate for this the amplifier has to work hard. Due to this, the wires heat up and meltdown. The amplifier has to work hard when the wire is crushed, mashed, or damaged. To maintain the safety of the amplifier, ensure less heat is generated. It is advisable to pick a 10-gauge wire size irrespective of its power rating. These wires allow the current flow smoothly through these wires.

Incorrect grounding – The other reason could be the incorrect connection with the ground. Spikes in the current could cause the fuse to blow if the wire is damaged or the system is not grounded properly. To remedy this issue, trace the ground wire – usually the black one. Check the chassis for any damages that could be hindering the flow of the current. If the wires/cables appear fine and there are no breaks, bends, or chews by rats or deterioration due to aging then check the connection. The connection point should not be loose. If it is due to any of these causes the amplifier will shut off and the fuse will blow.

Power wire could be grounded – In case the power cable connected to the battery and responsible for a hot connection is grounded. The fuse of your car will blow. This pop-up fuse has a specific purpose – that is to keep the amplifier intact.

In conclusion, the purpose of the fuse is to protect the devices in the electrical system of the car. It protects the devices by cutting the connection thereby preventing a power surge or overload in the device or system. To check the fuse is blown check the car’s manual and locate the fuse box. Then study the circuit assigned to each fuse. It is shown in the diagram. 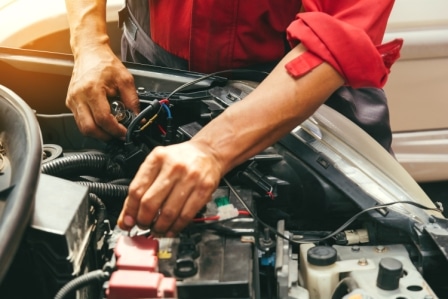 Inspect the fuses for wire connections, burn marks, etc., and replace them if necessary. They are easily available at any car parts or hardware store and cost a few cents.

Usually, the fuse blows due to incorrect amperage rating. Check what systems and devices are powered by that circuit. They may be pulling too much power from it causing the fuse to blow. This is called the load. The larger the number of devices on the circuit the heavier the load on it. The fuse also blows due to a low resistance connection between conductors in a circuit.

There are 3 other reasons why fuses blow and each has a tell-tale sign. The first reason may be that the device has failed. For example – the motor of the wiper or the power lock solenoid has melted. This causes the device to draw too much power to keep functioning. The overload in the system causes the fuse to blow.

The second reason may be friction against the wire harness which may cause the insulation to fray. The exposed wire may cause a short circuit if it touches a ground surface. It may come in contact due to gusts of breeze or jostling while the car moves.

The third reason may be a connector exposed to the elements may cause a short circuit. If there is a leak in your car it may soak the carpet which may wet the wiring harness. The wet harness can corrode over time eventually causing the fuse to blow. Inspect and correct these issues in your car to prevent the fuses from blowing.