Why Fuse Keeps Blowing in a car? Main Causes & Fixes

When it comes to a blown fuse, finding the root cause and how to repair it matters the most. Regardless of the car’s make and model, it indicates an electrical malfunction. This article will discover the causes of a blown fuse in a car and how you can fix it.

While you can fix a blown fuse by simply replacing it, there can be different reasons your car fuse keeps blowing. Repetitive car fuse can be daunting, and the right approach to fix the issue is to find the root cause. Continue reading the article to know the possible reasons for a recurring blown fuse.

If you’re experiencing issues in your electrical system, including headlights, radios, windshield wipers, etc., a blown fuse is yet to blame. There can be different causes for a car fuse that keeps blowing. The most common include a short circuit in the wiring or an unfitting fuse amp rating. You can fix the issue by replacing the fuse.

What is a Fuse & How Does It Work?

Before we discuss the causes and fixes of a blown fuse, let’s talk about what it is and how it works in a car.

The main reason the fuse is there is that if a too-strong current passes through the fuse, it will melt or burn, stopping the electricity flow and breaking the circuit so that the high voltage doesn’t damage the car’s electrical components.

Therefore, it is essential to use a fuse or fix a blown fuse so that the current in the car stays at a reasonable level and doesn’t affect the car’s electrical components.

Causes and Fixes of a Blown Fuse

There can be several causes of a fuse that keeps blowing. We’ll discuss some in this section.

As mentioned earlier, a fuse is there in your car for a reason; to protect your car’s electrical; components. Fuses are rated by how much current they can handle before getting blown. Here, let’s talk about two scenarios.

I also had this problem with my Chevrolet. The fuse kept blowing every time I changed it. I thought of inspecting the amp rating according to my owner’s manual. When I matched the ratings with my car fuse, the amp rating was too small than the recommended one. I replaced the fuse with the correct amp rating and resolved this issue.

You must choose the correct fuse size if this is the reason. Now what you have to do is to check your fuse size and figure out whether or not it is suitable for your car. There are two ways to find out the amp rating of the fuse. 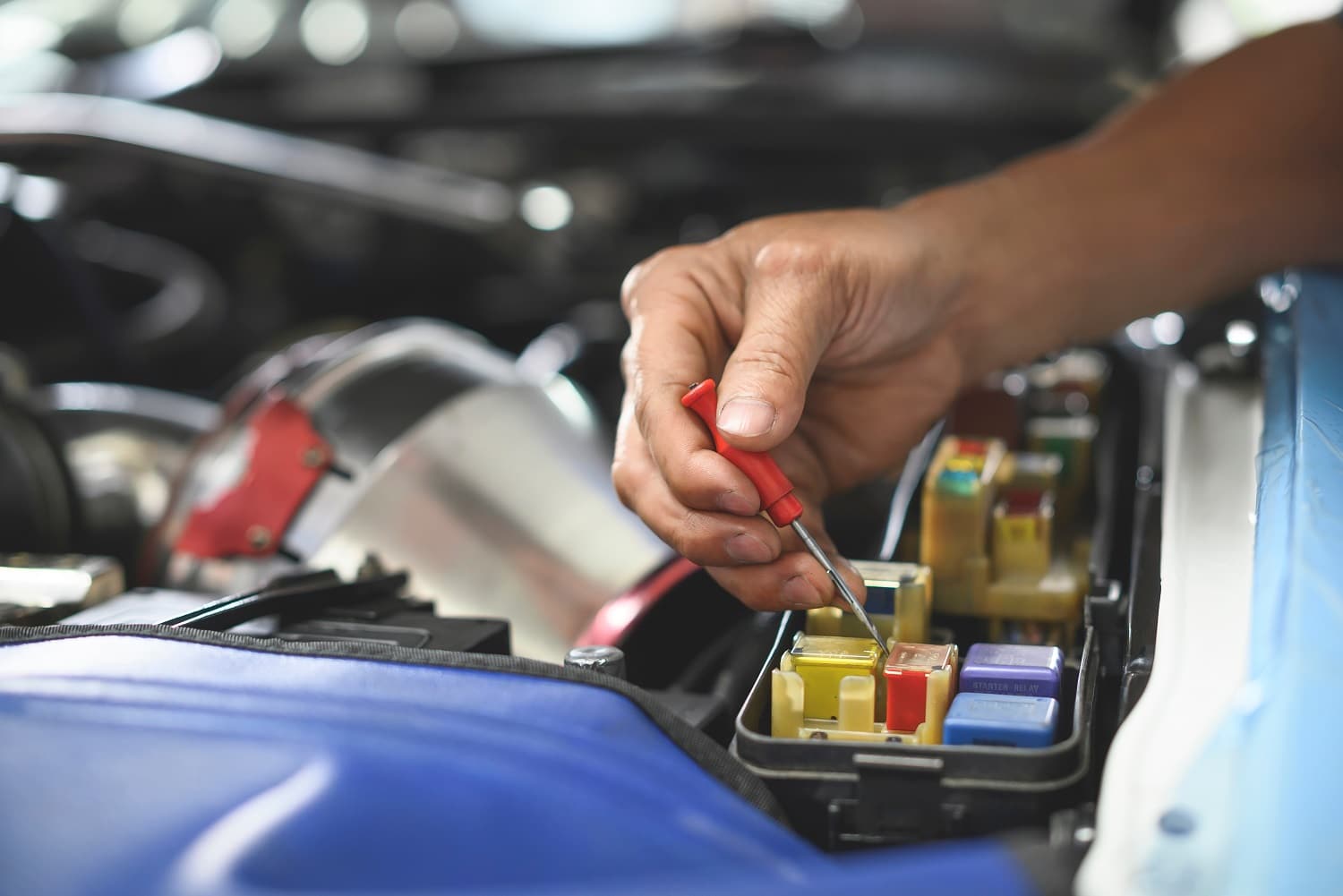 Once you have found out the amp rating of the blown fuse, consult the owner’s manual to check whether or not it is suitable for your car. If not, replace the fuse with an appropriate fuse.

A circuit would be incomplete without the load, a component powered by the energy; for instance, a light, heater element, motor, etc. The wiring circuit is susceptible to failure in the load.

Electrical components comprise a motor, and a common reason for a blown fuse is a motor failure. There can be three types of failures.

The wiring of the component is generally not visible in a car, and you can’t open it for inspection or repair. So apparently, it is not obvious that a failed component is why the fuse keeps blowing.

To find out whether this is the reason or not, do the following:

Get it checked by an automotive mechanic.

3. Short Circuit in the Wiring

If you have checked the fuse size and it’s correct according to the owner’s manual, there might be a short circuit somewhere in the wiring. There can be two causes of a shortage in a vehicle’s wiring.

Check for signs of chafing or water contamination in the wiring. Do the following.

This is how you can eliminate chafing or water moisture. 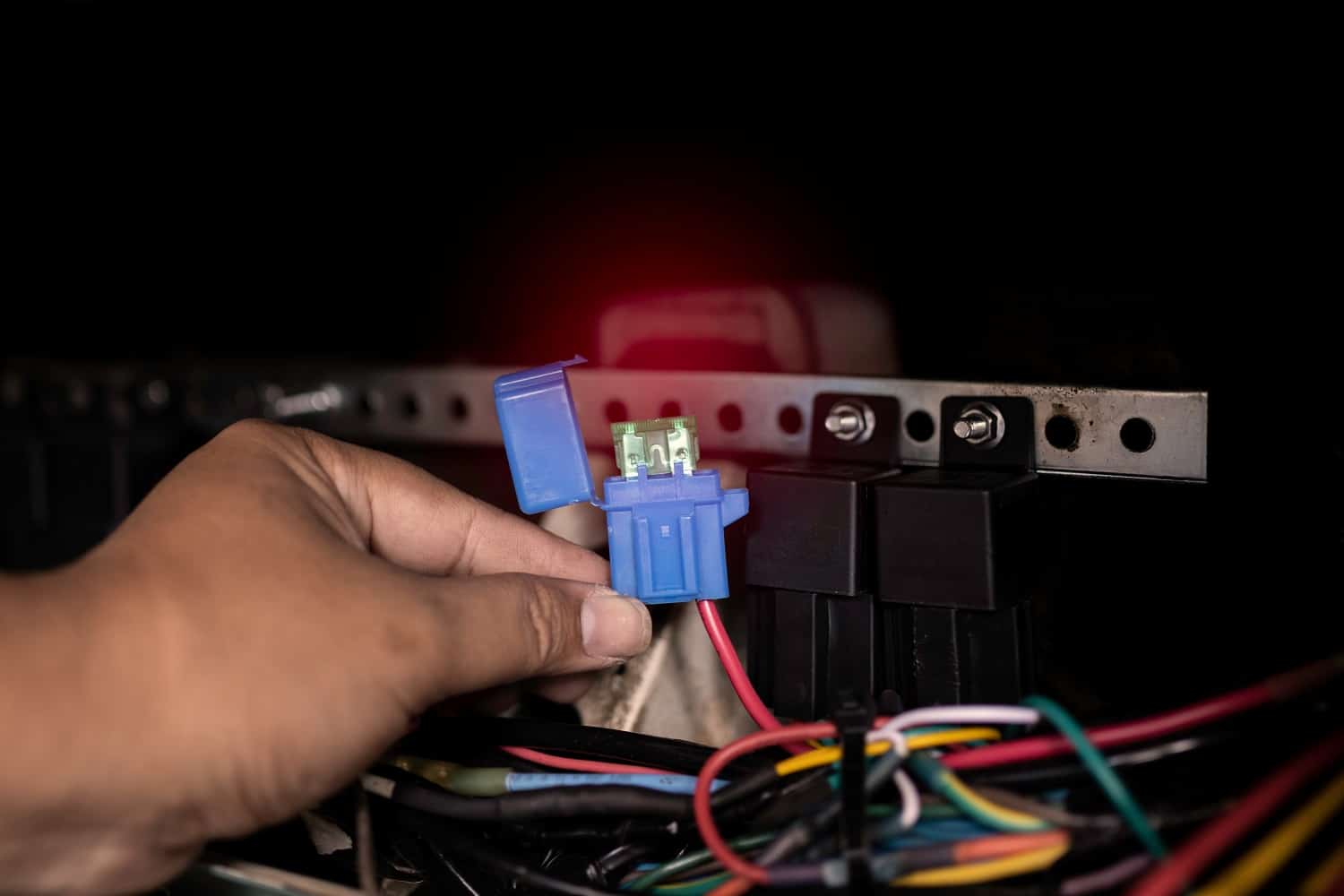 A defective wire or one with a smaller diameter than recommended can cause resistance. As a result, the amplifier has to work while consuming much time and effort, thus generating heat in the system. This heat constantly flows in the car fuse, and as a result, more resistance is formed than necessary, leading to the car fuse blowing.

One of the things you can do here is to avoid producing so much heat so that it doesn’t endanger the amplifier’s internal safety. Moreover, the wire should be of 10 gauge size minimum so that the current smoothly flows through the system and doesn’t cause the fuse to blow.

As mentioned earlier, water contamination or moisture can affect the wirings in the system. There can be several reasons for water leakage in automobiles. First, any liquid dripping on the following can cause a short circuit in the wiring and lead to a blown fuse.

It’s always better to ensure that your wirings or electrical components are not exposed to water. If you find moisture or any electrical system leaks, consult a mechanic to sort out the issue. 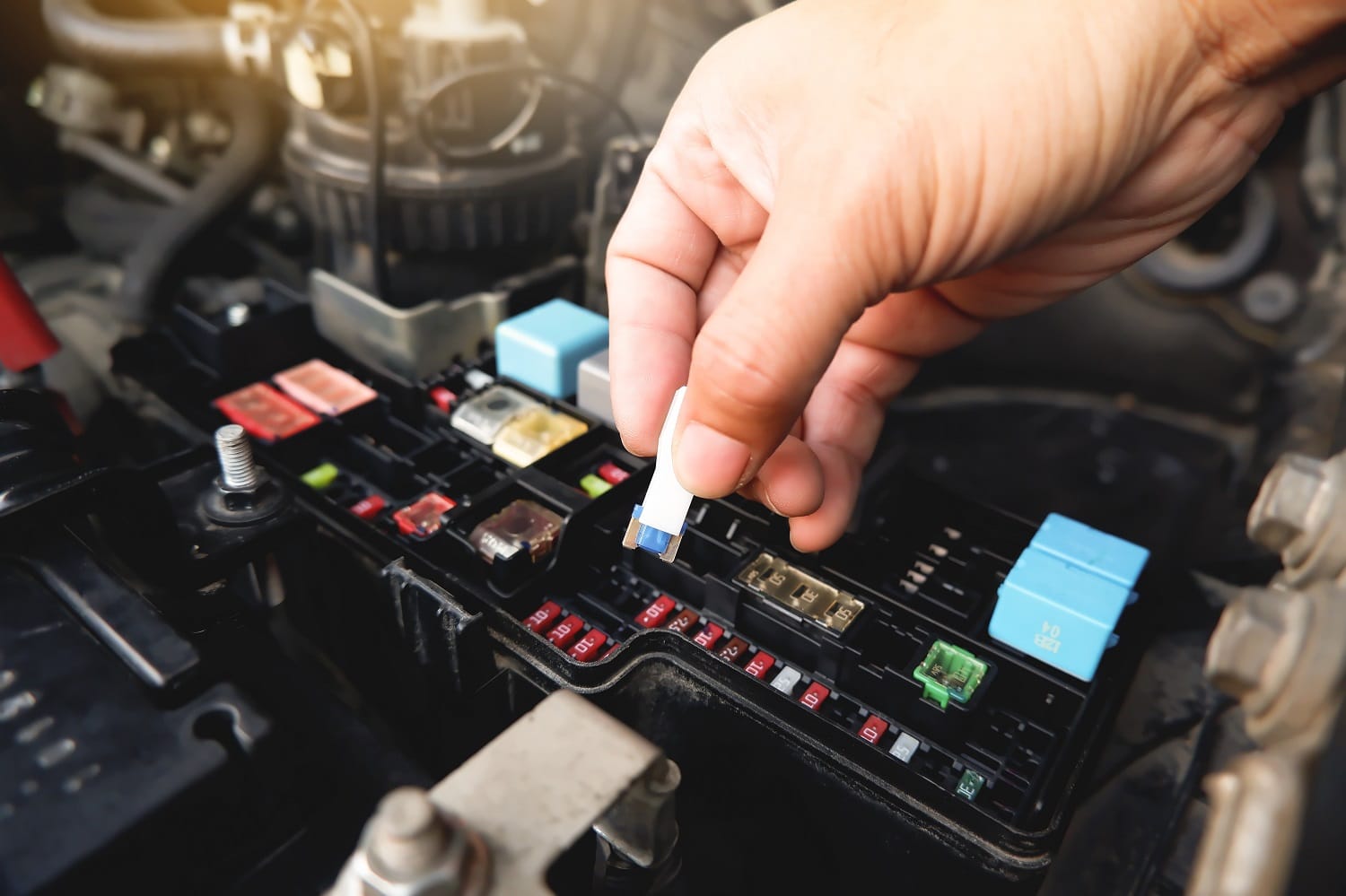 Arc fault or arcing is when a circuit overloads with current and overheats. As a result, overheating can damage the wire or lead to a short circuit. Also, arcing can occur due to worn-out or broken wires.

Consequently, a short circuit due to arcing will make the fuse blow.

This is the same as a short circuit in the wiring or broken wiring. To resolve this issue;

Replace the broken wirings or visit a mechanic to get the job done.

Any damaged wiring or connected parts pose a risk and can lead to a power fault, tripping a circuit, which again will cause the fuse to blow. The fuse is not to blame in most cases, as it’s doing what it was made to do. The fuse saves the system from any bigger issue, such as fire.

To fix this issue, do the following.

This is one of the most common causes of a blown fuse. When the circuit is overloaded, the electrical component draws too much power from the circuit, which will cause the fuse to blow.

You can fix this issue by doing the following. 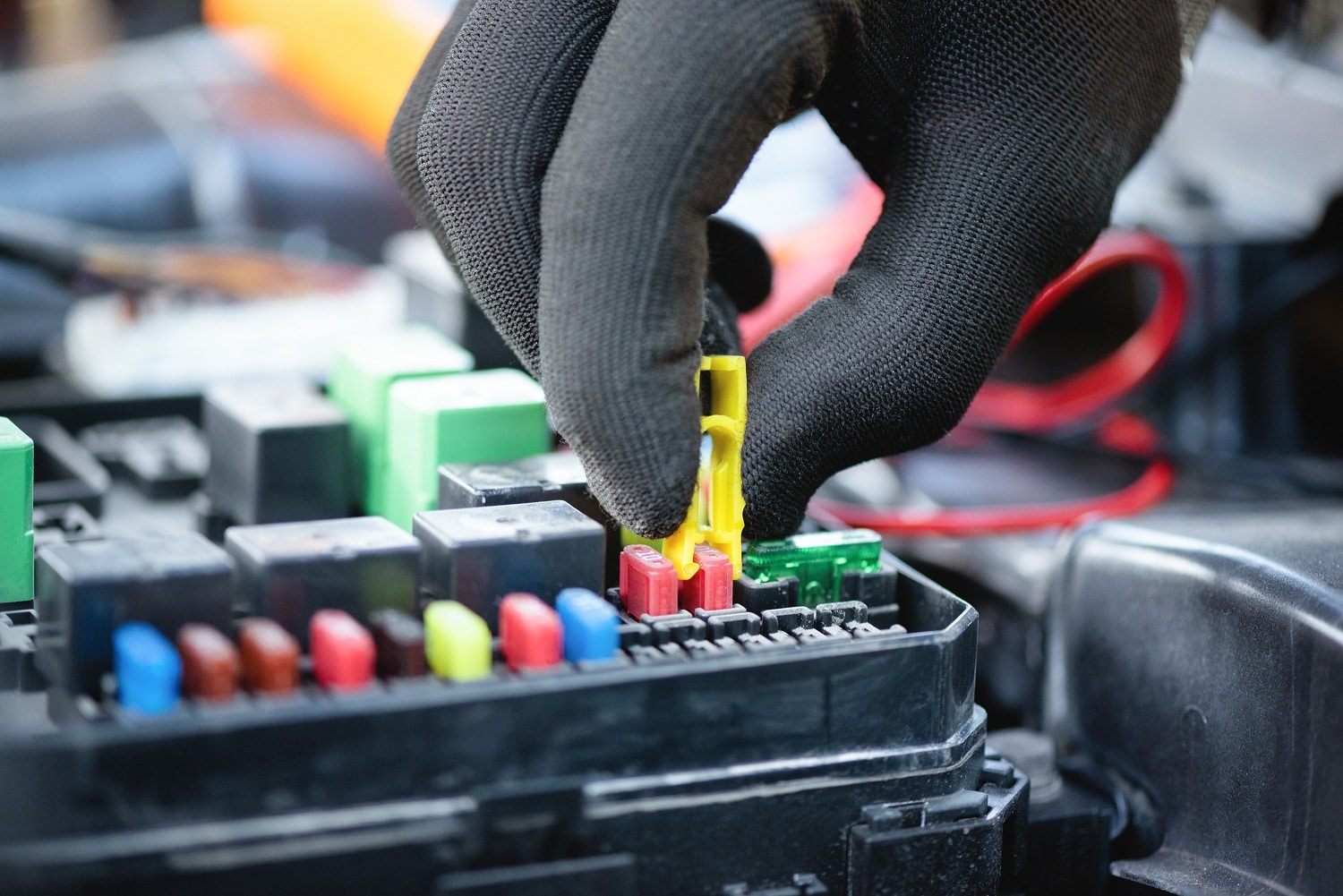 A malfunctioning car stereo can also cause the fuse to blow. This is something most people don’t know about. You notice a malfunctioning or burning smell when you turn on the stereo. You know that the stereo fuse has blown. But what makes it blow? There can be three reasons.

If your car fuse keeps blowing when you turn on the stereo, do the following.

Another reason for your car fuse to blow can be the car AC. If your AC suddenly stops working, it has been working overtime in the hot weather and might have tripped due to overheating, which, as a result, can blow the fuse in the AC unit.

If you think the fuse has blown due to a malfunctioning or overheating in the AC unit, do the following. 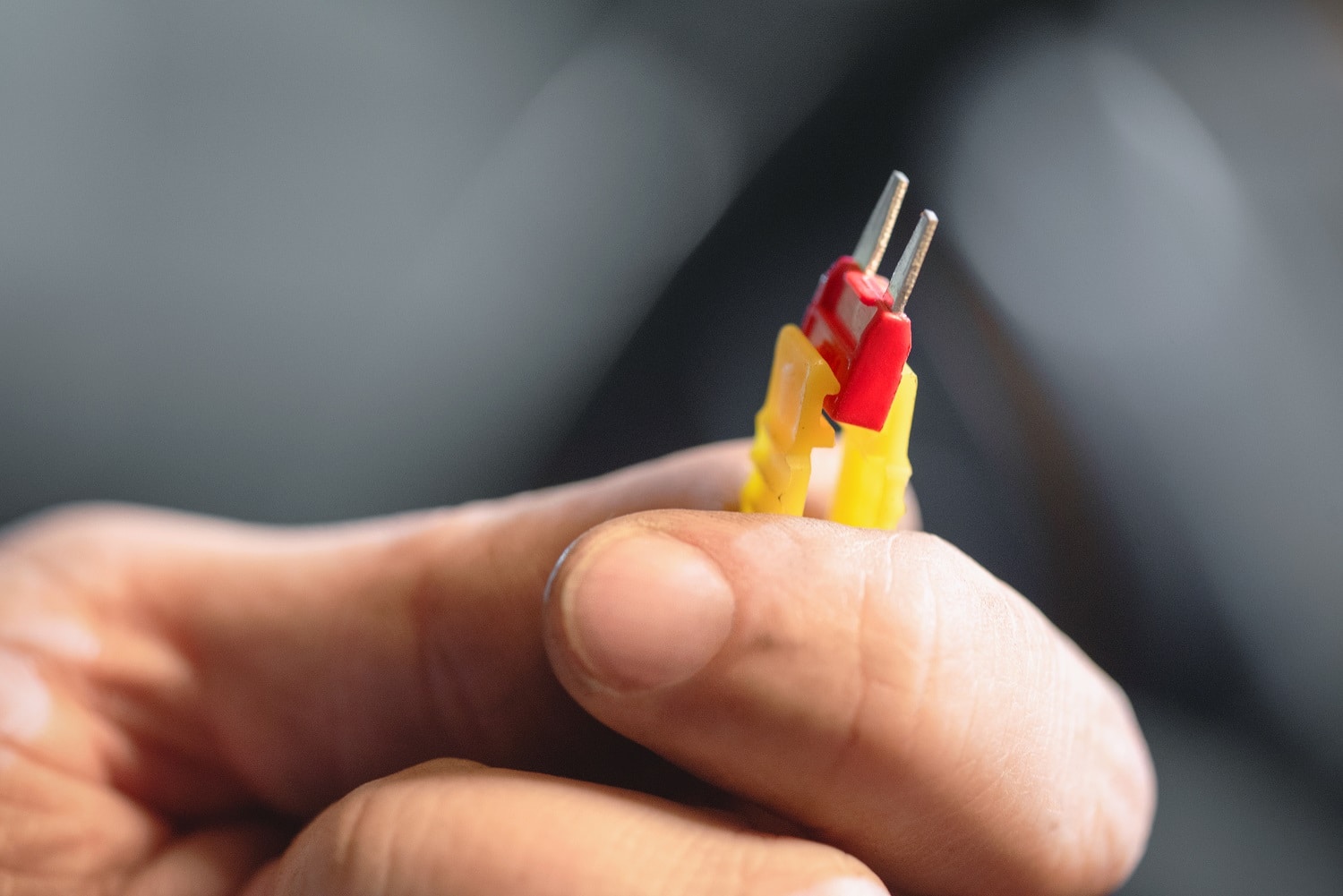 How Do You Replace a Blown Fuse?

The fuse replacement process is simple, and you can do it yourself. Follow these steps to replace a blown fuse in a car.

If the fuse keeps blowing repeatedly, consider consulting the fuse size from the owner’s manual. First, check whether or not the broken fuse is of appropriate size. If it happens to be too small, replace it with one recommended by your car’s manufacturer.

While there can be different causes for the fuse blowing in a car, the most common among them is a too-small fuse size or a short circuit in the wiring. If you have a fuse too small for the electrical current passing through it, it will keep blowing as soon as the current passes. Consider replacing the fuse with an appropriate amp rating, as your car manufacturer recommends.

On the other hand, if the fuse keeps blowing and the size is accurate, check for any short circuit in the wiring. If you cannot discover the cause, consider visiting an automotive mechanic and getting this issue fixed as soon as possible.

What to do if a fuse keeps blowing out?

If a fuse keeps blowing, check for overloaded circuits or the size of the fuse. A too-small fuse will blow as soon as the current passes through it. Also, check if the circuit is overloaded. Reduce its load to eliminate this issue.

Can a car run with a blown fuse?

A car can run without a fuse, as a blown a fuse will generally cause a minor electrical problem, like not working interior lights or backup lights. However, driving a car without a fuse is not recommended, as a large electric current can cause damage to the car components.

What are the signs of a short circuit?

There can be different signs of a short circuit, including radio cutouts, flickering lights, etc. However, sometimes, short circuits in your car wiring cause electrical issues.

Can a short circuit damage a car?

A short circuit generally occurs when excess electricity flows through a small area. It can cause the wires in your car to overheat, sometimes potentially leading to a fire.

Do I need a bigger fuse if it keeps blowing?

If the fuse keeps blowing, it depends on the actual cause. It can indicate either the fuse size is too small or a problem in the electrical system. A short circuit in the wiring can also be a reason. Find the root cause and fix the issue.